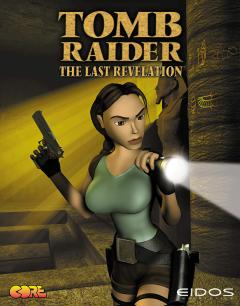 Synopsis:  “According to Egyptian legend, Horus, son of the light, outwitted the evil God Set and imprisoned him in a secret tomb. Five thousand years later, Lara Croft discovers the lost tomb and unwittingly unleashes the evil God Set, fulfilling the ancient prophecy of his return to plunge mankind into darkness! In a race against time, Lara must use all her wit and skill to re-imprison Set and save the world from Armageddon. Pursued at every turn by her arch-rival, the unscrupulous archaeologist Werner Von Croy, Lara embarks on a journey of discovery across Egypt, where she must overcome the most ingenious puzzles and infernal traps ever devised, and face terrifying evil from beyond the grave... With more twists and turns than an Egyptian labyrinth, this is heart stopping action-adventure; a Tomb Raider that truly offers... The Last Revelation.”

The game features many new moves. Lara can now grab hold of ropes dangling from the ceiling and swing from them. These can be used to cross large gaps. She can climb up and down ropes and poles also. She can now shimmy around corners unlike in previous titles. Lara herself in this instalment has a smoother, more refined appearance. This is due to moving and flexible joints between meshes, creating a more realistic approach to the heroine. In this game, Lara has the ability to return to previous levels, with some levels taking place in a non-linear order. She also has the option of taking different routes through some of the levels, each with their own set of challenges. Instead of the previously used "item ring", the inventory screen places the items into a line. There is also a compass in the lower left hand corner of the inventory screen, but it is only important to activate cheats or to help solve a puzzle in the Citadel level. Also, when in the inventory, some items will have the word "combine" in its menu. Selecting it will cause a second item line to appear. The player can then select an item to combine with it to form a new item. A new weapon, a large revolver, appears late in the game and is very powerful and effective at stopping enemies. When combined with the laser sight, which lights a red dot at the point where the bullet will strike, the player can use it to shoot specific small targets. The player can also attach the laser sight to a crossbow.

There are two PlayStation versions of the game, with minor differences. The first version allows the player to load a saved game immediately after death, and can save a maximum of seven games per official PlayStation memory card. The second version requires going back to the title screen after death and only allows five saves per memory card. The latter version is the one available for download on the PlayStation Store.

The Times, in association with Core, designed a one-off special level to celebrate the finding of Tutankhamen's Tomb.Sir Peter Stothard, a Britishnewspaper editor, is featured as a character briefly in the first scene of this expansion