Lara Croft and the Temple of Osiris 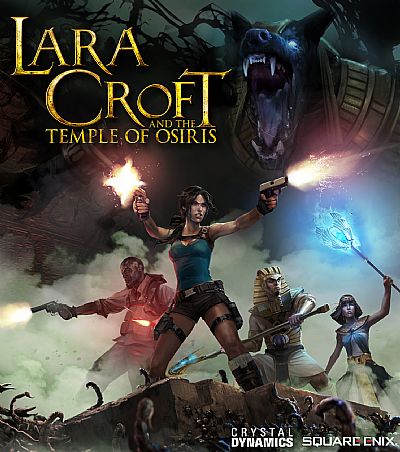 Synopsis: Lara Croft and the Temple of Osiris is the sequel to the critically-acclaimed Lara Croft and the Guardian of Light, and the first-ever four-player co-op experience with Lara Croft. Featuring stunning visuals and a brand-new story, players must work together to explore the temple, defeat hordes of enemies from the Egyptian underworld, solve devious puzzles, and avoid deadly traps. All the while, players will compete for treasure, powerful artifacts, and ultimate bragging rights. Lara Croft and the Temple of Osiris takes place deep in the deserts of Egypt. In her new adventure, Lara must join forces with rival treasure hunter Carter Bell and imprisoned gods Horus and Isis, to defeat the evil god Set. As Lara and her companions fight the elements of nature across the sands and through ancient tombs, they will battle legendary deities and creatures of myth. With the fate of the world at stake, Lara must recover the fragments of Osiris to stop Set from enslaving all mankind.

On 3 November 2014, Valve Corporation and Crystal Dynamics announced a contest for people to produce and submit promotional Tomb Raiderthemed content for the video game Team Fortress 2. The winning items were announced on 3 December 2014 and were implemented in Team Fortress 2 as rewards for people who pre-purchased Temple of Osiris. Contest winners received a selection of titles from Square Enix's catalogue onSteam.

The game launched on 9 December 2014. The studio released the game's original soundtrack as a free download. A limited Gold Edition of the game was available to purchase in retail; it included a 3-inch Lara figurine, art book, a map of the game's overworld, and a season pass for downloadable content (DLC).

The game was released as part of PlayStation Plus free games in August 2015.

Prior to the game's launch, a season pass was announced which would include all future downloadable content for the game. On 13 January 2015, four downloadable content packs were released, three of which contained in-game items and character skins based on Tomb Raider: Legend, and theDeus Ex and Hitman franchises. These themed packs were previously available as bonuses for pre-ordering the game from specific retailers. The fourth content pack, titled Icy Death, added various in-game items, a tomb featuring new puzzles and enemies, and a Lara Croft character skin based on the 2013 Tomb Raider video game. On 2 February 2015, the Twisted Gears downloadable pack was released featuring a tomb, new in-game items, and a Lara Croft character skin based on the original Tomb Raider game.