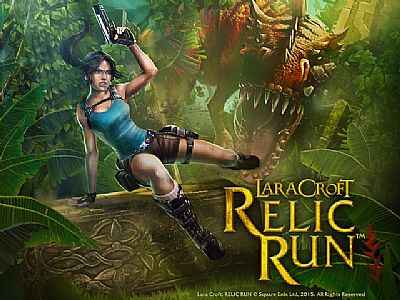 Synopsis: Lara Croft: Relic Run is the all new action adventure for nostalgic Lara Croft fans.
When a shadowy conspiracy threatens the world, only Lara Croft is equipped to unearth the truth. Run, swing, drive, and swan dive your way through beautiful and challenging environments, uncovering ancient relics to discover the truth and solve the mystery.
There’s no time to waste, but how long can you survive?

Lara Croft: Relic Run is an action-adventure endless runner platforming game in which the player controls Lara Croft, main protagonist of the Tomb Raiderfranchise. The gameplay is similar to Temple Run: Lara must navigate endlessly looping environments, accumulating a score depending on the distance run. The game uses touch controls, with different movements across the screen prompting an action from Lara. If Lara hits an obstacle, the run ends unless the player uses an Ankh, in which the case the run is continued from a checkpoint. Within these environments, Lara must navigate around natural obstacles and deliberate traps. The difficulty and frequency of obstacles and traps increases as the run continues. Lara can perform parkour moves within the environment, along with sliding, jumping and wall-running, each triggered contextually by a movement of the controls. During some segments, Lara must fight off enemies using equipped weapons: these include her trademark twin pistols, sub-machine guns and an assault rifle. Players tap on enemies to fire at them, along with crates containing coins or health. Each stage has both a vehicle section, with Lara riding vehicles such as a quad bike or motorbike through areas of the level, and boss fights, where she fights large monsters, such as a Tyrannosaurus in the Jungle stage.

During runs, Lara collects coins which are used to purchase additional outfits that grant certain boosts to the player, new weapons, and upgrades to her boots for easier runs. Lara also collects Clues, objects scattered along the route that fill up a metre in the top left corner of the screen. Once the metre is full, a Relic will appear, and Lara must collect this Relic. Lara can also collect score multipliers, which increase her run's overall score; caches of ammunition for her additional weapons; coin magnets, and Clue Boosters to find Relics faster. Each stage has a set of achievements to unlock. Players with a Facebook account can post their scores on the site, and can also be sent Curses, which distort the game's visuals (such as creating a tunnel vision effect or pixellating the graphics) for a limited time. If a player survives the Curse, they are rewarded a cache of coins and the opportunity to send their own Curse to the other player. The game is free and all items can be unlocked in-game, but players can unlock various costumes and caches using in-app purchases.

Relic Run takes place in the Lara Croft subseries, a continuity separate from the mainline rebooted Tomb Raider games. When the project was first proposed, it was intended that Lara should retain key abilities from the main series, specifically her acrobatic abilities and the combat segments. While they used other endless runner games as a base, they did not want to copy them, instead trying to evolve them in a meaningful way. The bosses, such as the Tyrannosaurus, were included to give the game a fantastical feel, as opposed to the more mature and realistic entries in the main series. The ducking and diving sequences Lara went through entering these stages were incorporated to mask loading times. Striking the balance between the game's challenge and encouraging players to return was a crucial part of game development. Franchise developer Crystal Dynamics worked closely with developer Simutronics when designing the game, ensuring that it would remain faithful to the series despite its status as a mobile spin-off. The core fanbase was also consulted during development. The game's aesthetic was deliberately intended to evoke earlier Tomb Raider games: for instance, the opening Jungle stage evoked the opening levels of Tomb Raider III: Adventures of Lara Croft. It was also intended to appeal to a wider audience due to its platform and genre. Relic Run was first announced in April 2015, shortly thereafter going on a soft release in the Netherlands so any problems with the game could be sorted out prior to the full release. The game included advertisements incorporated in partnership with NativeX. It was released on May 28, 2015 for Android, iOS and Windows Phone 8.